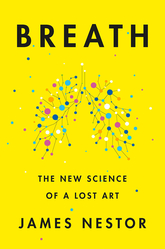 You will never breathe the same again

There is nothing more essential to our health and well-being than breathing. Yet, as a species, humans have lost the ability to breathe correctly, with grave consequences.

Journalist James Nestor travels the world to figure out what went wrong and how to fix it. The answers aren’t found in pulmonology labs, as we might expect, but in the muddy digs of ancient burial sites, secret Soviet facilities, New Jersey choir schools, and the smoggy streets of São Paulo, Brazil. Nestor tracks down men and women exploring the hidden science behind ancient breathing practices like Pranayama, Sudarshan Kriya, and Tummo and teams up with pulmonary tinkerers to scientifically test long-held beliefs about how we breathe.