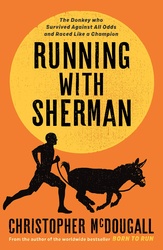 When Chris McDougall got Sherman from an animal hoarder, the donkey was in such bad shape he could barely move. Chris set out to rehabilitate Sherman’s body and mind. It turns out the best way to soothe a donkey is to give it a job, so Sherman learned to run. When Chris heard about a unique type of race where humans and donkeys run together in a call-back to mining days, he signed them up for the World Championship in Colorado.

Easier said than done. Chris had to recruit several other runners, both human and equine, and call upon the wisdom of burro racers, goat farmers, and a group of irrepressible female long-haul truckers. Along the way, he shows us the life-changing power of animals, nature, and community.